There are five basic flower forms generally acknowledged to occur in herbaceous peonies. Unfortunately, the demarcation where one form leaves off, and another begins, is not always distinct, nor sharply defined.

Some varieties may express themselves as different forms one year to the next in response to weather or nutrient levels, and other varieties defy flower form classification because they display two or more forms on the same plant during any given season. The following is an attempt to clarify flower forms, at least in my own mind.

Single
This is the basic simple peony with a number of petals surrounding a center composed of functional stamens and carpels.

Five petals is the normal number found in wild peonies but cultivated varieties generally have more than this, often nine to twelve. Even with twelve petals they may start to overlap with the semi-doubles for show purposes. Singles have pollen-bearing anthers and there is a sharp demarcation between petals and the stamens in the centre. 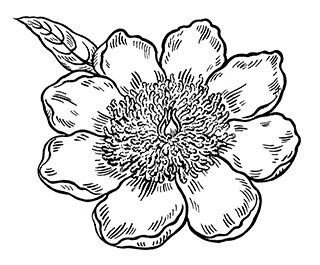 Japanese
This form very much resembles the singles to many people. Closer examination of the anthers reveals that there is no free pollen. This results in a flower that has the simplicity in form of a single while maintaining the petals in pristine condition unsoiled by dropped pollen.

The Japanese people prized these characteristics and many of the first peonies of this type were imported from Japan.
The stamens have begun the transformation towards doubling, and pollen, though often present, is encased in tissue and unavailable, but it has been excised and used in cross-pollination by some peony breeders, notably Edward Auten Jr.

Anthers are the pollen bearing structures of the flower and they are supported on slender stalks termed filaments, which taken together make up the stamens.

In the Japanese form the filaments have broadened and flattened to some degree and the anthers are incompletely developed, also called abortive by some authors. The transformed stamens at this stage are termed staminodes and these are the distinguishing characteristic of Japanese form peonies.

During World War II there was some pressure to rename this flower form and the term most preferred at the time was “Staminodal”. A descriptive term such as this may have helped avoid much of the confusion and error with which we have to deal today when talking about “Japanese” and ‘Anemone” forms. As a result it is unreliable to depend on published registration information to determine flower form where Japanese and Anemone types are concerned.

Staminodes may be in a colour contrasting with the guard petals. Almost invariably the edges, especially at the tip, are yellow, representing what remains of the pollen or its pigments. Even when the staminodes are yellow all over, close examination will reveal either a change in shade or texture along the edges. 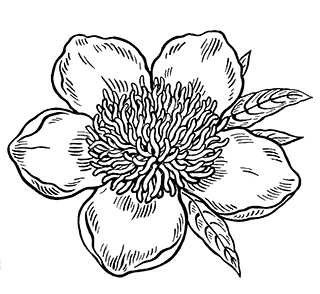 Anemone
These blooms represent the next progression in “all-over stamen transformation” doubling (the Japanese form being the first stage).

The staminodes have transformed even further and have lost any resemblance to the filaments and anthers from which they were derived. They look more petal-like, albeit very narrow in many cases, and are now referred to as petalodes, or sometimes petaloids by some authors.

Petalodes are almost always a single colour throughout, which can be the same as the guard petals or a contrasting colour, often yellow or white.

Many of the Anemone type peonies have a strong superficial resemblance to the Japanese form and this, along with a few other factors, has resulted in most of them being registered as Japanese.

Anemones seem to have been ignored ever since Alice Harding wrote (about 1920) that there were very few good examples of this form. Much has changed since then and today some of the most striking peonies are to be found in this class.

The American Peony Society Handbook of 1953 describes anemone type peonies in an adequate manner, yet in that same document where representatives of the various types are listed, Anemones are nowhere to be found.

Add to these ‘White Cap’ and ‘Butter Bowl’ and you would have a fine collection of distinctive and interesting peonies for the garden. 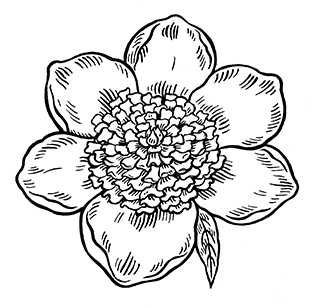 Semi-Double
These have a profusion of outer petals that are derived from the transformation of stamens. The transformation begins at the outer edges of the boss of stamens and proceeds towards the centre but always there are functional stamens remaining. The better forms have a distinct centre made up of pollen bearing stamens and functional carpels.
Examples include: 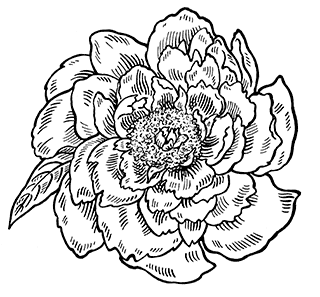 Double
All superficial evidence of stamens is normally lacking in doubles since most of these have been fully transformed into petals. Careful searching may turn up a few in much reduced numbers but typically, when present, they are not seen unless carefully looked for.

Functional carpels are present in some varieties but absent, due to complete transformation, in others.

In the days when doubles were so highly esteemed, almost to the exclusion of all other forms, there were crown, bomb, semi-rose, and full rose doubles designated. Today the American Peony Society distinguishes only the bomb type, in which the guard petals are longer than the transformed petals, as distinct from the others for show class purposes.

The CPS does not yet have separate classes for the bomb doubles. 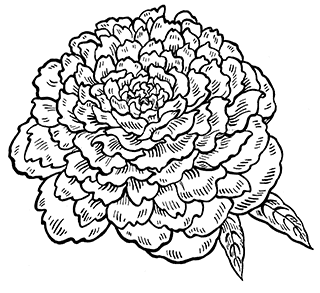