Apparently peonies have flowered in the gardens of Oregon almost from the state’s beginnings, as many of the settlers coming West during the 19th century carried dormant peony roots tucked into the nooks and crannies of their covered wagons. However, I first noticed them here in the Northwest just a few years ago during an early May visit to the Berry Botanic Garden in SW Portland – in particular a huge, almost forest-like tree peony covered with gigantic yellow blooms (left) and a sturdy herbaceous peony with striking bicolor blossoms (right). 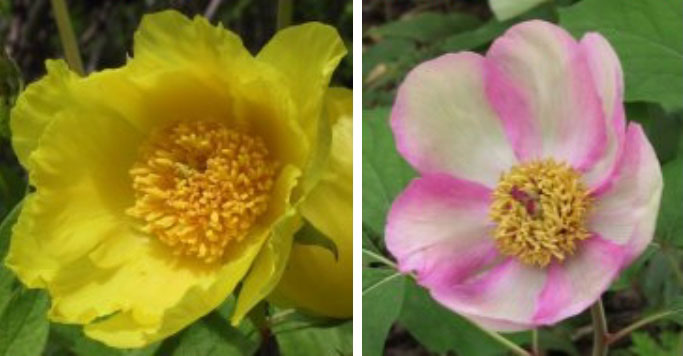 Peony plants can live for over 100 years, so it’s not surprising that many of the commercial peony growers in the Willamette Valley “have roots” in earlier Oregon generations. Allan Rodgers, for many decades the owner of Caprice Farms in Sherwood, one of Oregon’s first peony specialists and author of one of the most popular and authoritative books on the subject, obtained much of his original stock from the Marx nursery in Boring, OR, where Walter M had been a noted hybridizer for several decades before that; Allan’s son Rick, who owns Brothers Peonies in Wilsonville (specializing in tree peonies), traces much of his stock to Marx as well. Carol A, of Adelman’s Peonies in Brooks, OR (where many of the pix below were taken), was inspired by visits to the many peony varieties in the Salem nursery of Henry Hartwig (whose granddaughter Elizabeth is a 3rd generation grower in Duluth, MN); and Pacific Peonies of Canby, OR, began in 1993 with transplants from the Niva farm near Tigard, where Albert N had been a hybridizer for many years.

The genus Paeonia is divided into three sections. Paeon currently comprises ca 25 herbaceous species (ca 1/3 tetraploid, the rest diploid), perennial plants that die down at the end of each season and regrow from ground level the following year; they are fairly widely but disjointly distributed throughout Asia, northern Africa, and central and southern Europe. Onaepia contains only two herbaceous (diploid) species, both native to the West Coast of the United States: P. californica, which is endemic from San Diego north to Monterrey and flowers in early spring; and P. brownii, which is found at higher elevations from central CA to British Columbia and flowers during June and July. Moutan contains the tree peonies, which are in fact shrub-like plants with a permanent woody structure that rarely exceeds 6-8 feet in height; there are up to 9 (diploid) species, all endemic to China (where many wild species have recently been rediscovered).

The cultivation of peonies for medicinal use can supposedly be traced back to the prehistoric Xia Dynasty (2000-1500 BC) in China, where herbaceous varieties are still called shaoyao, ‘medicinal herb plant’; the tree peony, originally just ‘tree shaoyao’, was first described over a millenium later during the Qin Dynasty (221-206 BC), when a clear distinction between the two types first seems to have been made. Peonies as ornamentals were supposedly first grown at the end of the Sui dynasty during the reign of the Emperor Yang (605-617 AD), who apparently restricted cultivation to imperial use and allocated different flower colors to favored officials according to rank. Peonies spread throughout the country during the T’ang dynasty (618-906) that followed, and the tree peony (mudan, ‘king of flowers’) in particular – now China’s official national flower – grew in popularity as Chinese breeders developed huge, double-flowered varieties, both tree (left) and herbaceous (right), in a wide range of colors.

Both herbaceous and tree peonies were introduced into Japan at the beginning of the 8th century, where they soon became renowned as the ‘flower of wealth’. When Japanese horticulturists began to work with them, they simplified the Chinese flowers, producing lighter, less complicated heads, and plants with a more upright habit.

As in China, peonies were originally cultivated in Europe for their medicinal value, apparently first by the Greeks, to whom it was known as the ‘queen of herbs’. Benedictine monks finally introduced peonies as ornamental plants in the early Middle Ages; the flowers they grew in their monastery gardens were known as the ‘Benedictine rose’, probably a hybrid double form of P. officinalis, a hardy species native to central Europe. Significant peony breeding began in Europe (primarily France) at the end of the 18th c after the introduction of the herbaceous P. lactiflora from China. Although tree peonies were brought to England at about the same time, subsequent plants proved difficult to obtain and only became available from European nurseries in the 1860s. Chinese varieties with heavy double blooms remained popular until the late 1800s, after which tastes apparently shifted to the lighter, more upright Japanese varieties as they were introduced. The popularity of peonies in Europe declined in the early part of the 20th c, but has recently experienced a comeback.

European settlers brought ornamental herbaceous peonies (probably forms of P. officinalis) to North America in the late 1700s. While these were grown in many pioneer gardens, the popularity of peonies really exploded after the arrival of P. lactiflora hybrids during the 1830s. American nurseries began offering new varieties of their own by the 1850s, and by the turn of the century, the US had become the major peony producer in the world. However, America’s first truly significant peony hybridizer was Arthur P. Saunders, a chemistry professor at Hamilton College in Clinton, NY. Saunders systematiclly hybridized species peonies with P. lactiflora starting in 1915, eventually developing over 17,000 cultivars, including over 300 named varieties; Saunders also included tree peonies in his hybridization program, introducing more than 70 of these hybrids as well. When Saunders died in 1953, his assistant William Gratwick in New York, as well as many others (including Allan Rogers in Oregon), continued to work with his cultivars, helping to make the United States the peony hybridization capital of the world during the latter half of the 20th century. The popularity of peonies appears to have grown dramatically in the last decade throughout the US, as well as locally.

Although the wild species from which they were bred all have single flowers with three basic parts – petal, stamen, and carpel (pistil), the American Peony Society (APS) describes several distinct forms for flowers of cultivated peony hybrids, distinguished by the stage or degree to which the stamens and carpels of the flower gradually lose their reproductive roles and are turned into petals. The Single (see below) has a tuft of fertile golden stamens with green carpels at the center, surrounded by a row of five or more colored petals.

Semi-doubles (left) have the same fertile center tuft as the Single, but surrounded by several rows of petals. The Japanese (right) is also similar to the Single, except that the outer “guard petals” are enlarged and its stamens are sterile and flattened to form a dense central tuft of petal-like “staminodes” that can take many different shapes, but usually retain some of their original yellow color.

The Anemone (left) is similar to the Japanese, except that the stamen segments are further transformed into a tight tuft of “petalodes,” slender petals that are a blend of the flower’s predominant color with a tinge of stamen yellow. The Bomb (or Bomb Double), in which the center petals are smaller than the outer petals but have the same texture and color, and ideally form a neatly tailored ball or mound, is sometimes differentiated from the Anemone, but these forms are often combined, eg, in catalogs. Finally, Double (or Full Double) flowers (right), the classic, softball-sized or larger, flower-in-flower peony form, are completely sterile, with stamens and carpels fully transformed into staminodes and larger petals, forming a hemisphere.

Today peony hybrids can be found in a broad range of colors from pure white through pink, coral, and red to dark maroon (left); a wide variety of bicolored flowers have also been developed. Many bright yellow tree peonies are also available, but in herbaceous peonies, this color is confined so far to a few pale crosses with P. mlokosewitschii (the only herbaceous species yellow). However, thanks to the amazing efforts of the Tokyo hybridizer Toichi Itoh in the early 1960s, who successfully crossed a yellow tree with a white herbaceous peony, bright yellow Intersectionals like Bartzella (right), which are herbaceous in habit, are now available (as well as intersectionals in a full palette of other peony colors).