The food storage roots of well-grown healthy peonies will generally by symmetrical in outline and in cross section, smooth of surface. If there are branch storage roots, expect them to be smaller but otherwise similar. Also, by late summer, as we get into digging season, expect the current year feeder roots (those which have not taken on food storage character) to be mostly gone. New white feeder roots will be showing on peonies dug in later autumn when cool moist soil enables the next growth cycle to get underway. Peony roots showing distortion of growth may signal disease. 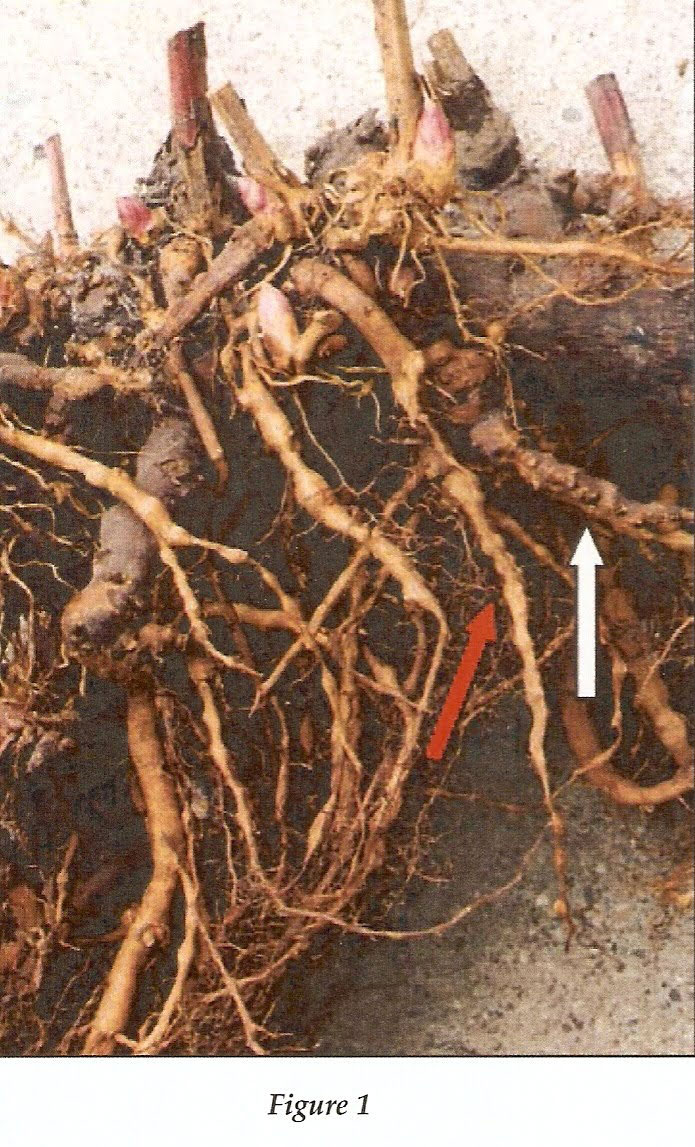 When cleaning peony roots for processing, seeing sequenced lumps of varying sizes that are interrupting the expected straight surface suggests Lemoine Disease (Figure 1, red arrow). Confirm the diagnosis by cutting across a lump. 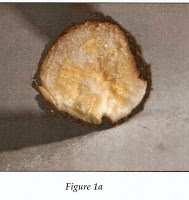 On the exposed face of the cut will be seen an irregularly shaped inclusion, usually surrounded by healthy tissue (Figure 1a). The inclusion color will be light-yellow, of smooth texture. Normal tissue is an opaque milky-white, rich with starch. The infected plant may or may not be suspected unless looking at the roots upon being dug and cleaned.

Known only in peonies, I find no modern plant pathology research on Lemoine Disease. The name “Lemoine Disease” was given by early growers upon finding it in plants received from Europe. Not all plants are affected alike. For example, insofar as I am aware there is no stock of peony (lactiflora) ALICE HARDING that is free of Lemoine symptoms, nevertheless the plant is very vigorous and flowers beautifully. Another peony lifted because of poor growth was found to be in the last stages of deterioration, the roots “pitted” where the infection sites had become open to the surface (Fig 1 above -White arrow- the onset of pitting) 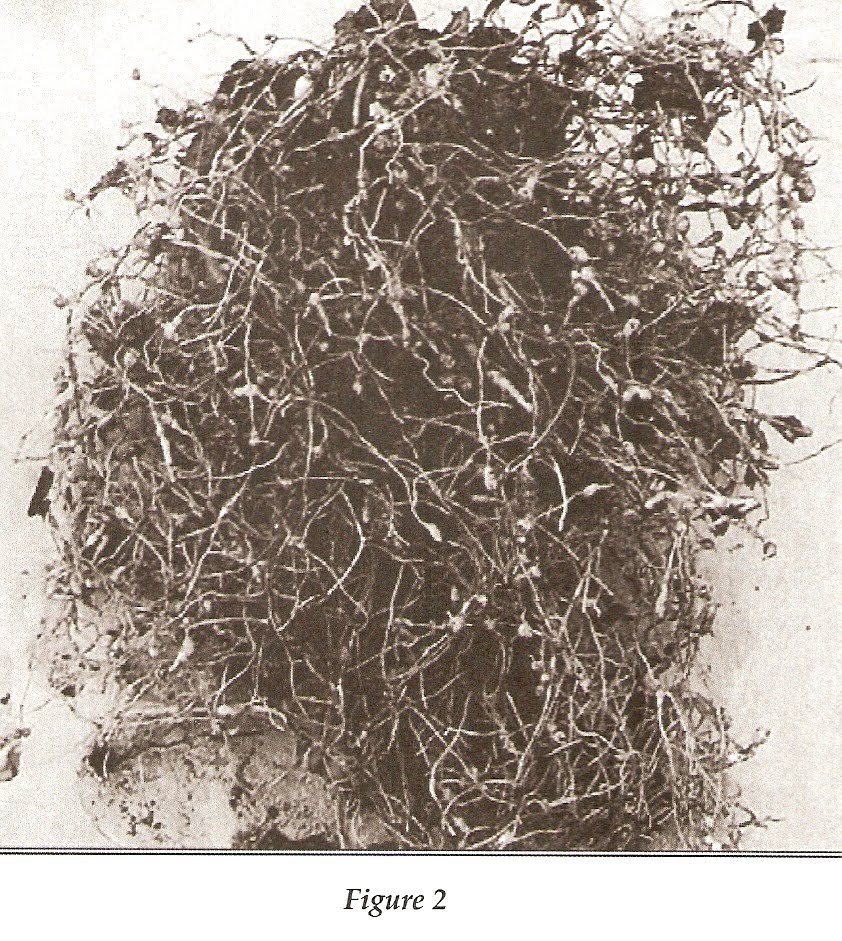 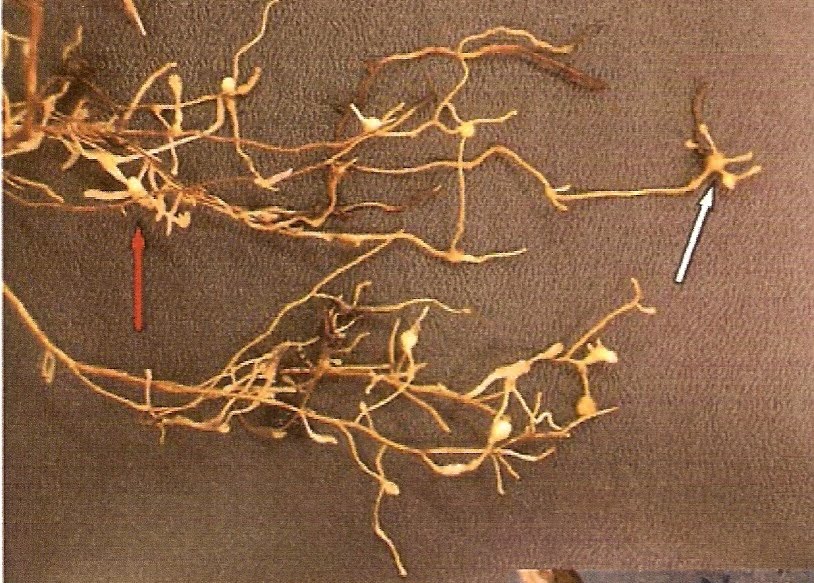 Each gall is a “ball” of root tissue which has grown around one or more living parasites. Branching results when the root tip is destroyed (fig 3, white arrow). Later in autumn on rootlets of the new cycle, the symptoms will be first noticed as a thickening, the branching and crooking may already be present. (fig 3, red arrow) 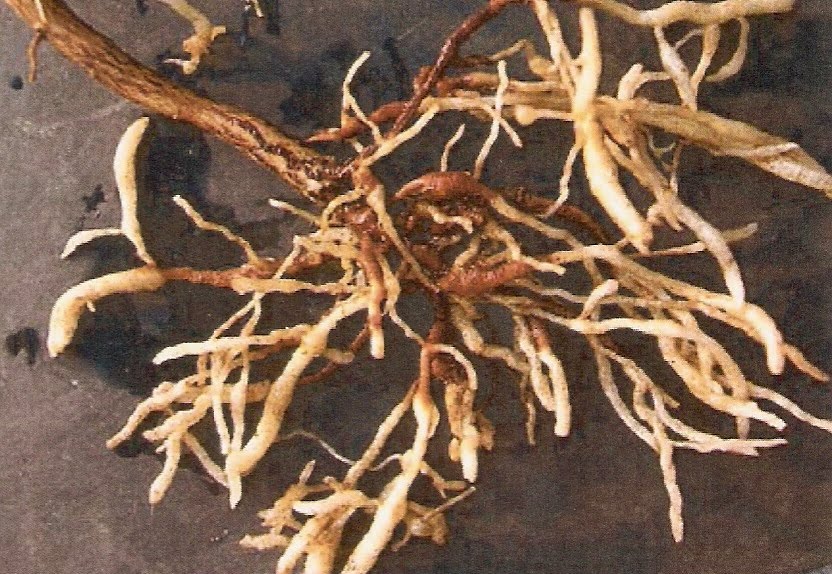 Figure 4 Infestation builds with egg-layering females, rootlets become much-branched and present themselves as ‘wads’ of rootlets. Root-knot nematodes are suppressed in clay soil where air spaces are small. When surviving only close to the surface they are vulnerable to winter frost. Sandy soils are deeply well aerated, enabling them to succeed at greater depth where there is protection from severe winter cold. 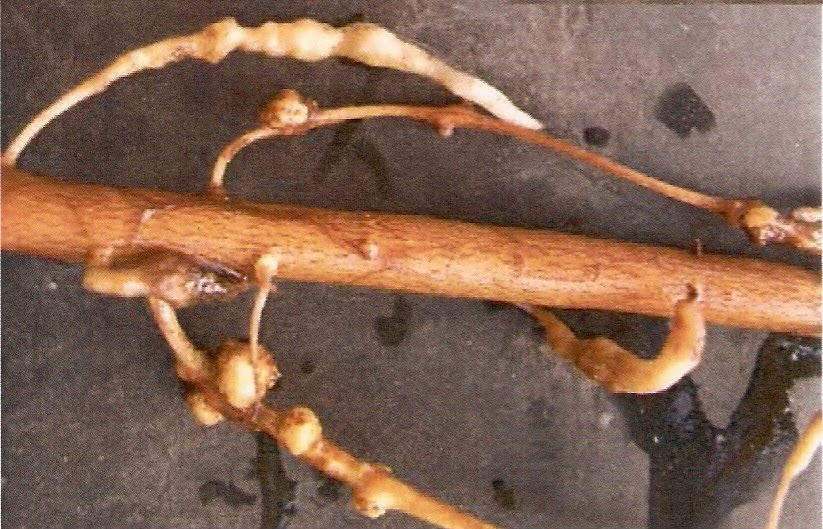 Severe infestations usually develop over two or more seasons. Plants will become sickly, the stems remaining thin and short, flowering fails. Accordingly, when properly planted peonies are not growing as expected it makes sense to inspect roots by taking up sample plants for diagnosis. Second season infection often shows what might be called side galls because the imperfection will show on only one side (Fig.5).

When a malady is found the first concern is to practice careful sanitation. Contain the roots and adjacent soil so they can be removed from the premises without spreading contamination. This is where that old and persistent rule, “never replant a peony without replacing all of the soil”, gains credibility. It makes no sense to put a new division into a nest of corruption. If in doubt whether the site can be successfully cleaned, grow a plant that is not susceptible for three years or more. True grasses are generally not susceptible. No known chemical treatments labelled to control root knot

The female root knot nematode is an obligatory and sedentary parasite. “Obligatory” in that is cannot mature nor reproduce unless it successfully parasitizes a host; “sedentary” means it becomes stationary. The nematode is genetically endowed to invade the physiology of the host plant, alter the root growth pattern around it, but is then unable to move. To accomplish this, the offspring, tiny nymphs that can move perhaps a couple of inches under their own power, must enter a growing root tip where the cells are dividing. The parasite retards the plant by preventing normal root reach, limiting water uptake, mineral uptake and competing for nutrients that would otherwise be used by the plant.

How do these tiny nymphs get spread greater distances? On infested planter pieces, in soil sticking to tools, on shoes, or animals and in run-off water. So, pay attention not only to your own plants, but also to the plants you may obtain from other gardeners or commercial sources.

The next issue is whether to try saving an infested plant. It can usually be done. The first step is to wash the roots free of soil on a grassy spot where the runoff drains away from growing areas. Remove all small roots at their point of origin – this is normal practice anyway – with the caution that infected waste needs to be carefully contained and destroyed. That takes care of the easy part.

Examine larger storage roots for any surface irregularities that might signal embedded older nematode galls. Nematode sites incorporated into bigger roots will have also grown larger with secondary infestation. Cut away root sections showing large irregularities. Small imperfections may be cored out, including any internal specks of discoloration. One member of any forked pair of roots should be removed, the point of separation examined, discoloured tissue removed.

Underground peony anatomy is made of two primary organs. One is stem tissue (the crown), the other is the roots. New root growth can come from either, but the nematode can only parasitize at the actively dividing cells of a growing root tip. True crown tissue is inherently without root-knot parasites, although nymphs can be carried on the surface and a good scrubbing may be helpful. Because the crown of a well-known peony plant normally contains substantial stored food, it is possible to produce planter pieces without support from true roots. One may also graft crown buds onto nematode free roots for added strength. Thus an observant and careful gardener may clean up infested stock and grow nematode free plants. Part of prudence will be to grow the plants in a quarantine area for the first cycle so they can be examined again before lining out with other stock.

A fungal disease more prominent especially in very wet seasons. The stems of your plant develop cankers or blacken at the base and fall over or simply wilt. Leaves may show black or brown patches and buds may turn brown and fail to open. Good culture and sanitation in the garden can help prevent or correct these problems. Plants need good drainage and air circulation, so do not crowd. Remove any affected foliage at the first sign of disease and deadhead religiously, removing all flower parts and petals from the garden. Cut off all foliage just below soil level after a killing frost in the fall and remove it and any debris from the area — do not compost. If botrytis was present the previous spring, add a shallow layer of sand around the plants and crowns. Fungal spores overwinter at the base of the plants, and spring rains then splash the spores up onto the new shoots. Removing any debris and old foliage and covering the soil with sand helps prevent reinfection.

Life Cycle
Botrytis fungi are both saprophytic and parasitic. The spore-producing structures of the fungus develop along the base of the rotting stalks and survive in debris left in the garden over the winter. In the spring, spores form and spread to dying, wounded, or extremely soft plant tissues. As the disease progresses, a gray mold develops. The gray mold is made up of spores that are either wind-blown or splashed onto new tissues and infect.

Another blight may also appear, but the two diseases are hard to tell apart, this disease is usually fatal to the plant and infected plants should be dug up and destroyed, and the soil replaced before replanting.

Diseases of Herbaceous and Tree Peonies

The most common diseases of peonies are:

To avoid diseases, prevention is the best solution.

To treat many diseases such as blackened buds, wilting, mildew or airborn botrytis, I use a foliar spray made up of 3ml of iodine to 20 liters of water. If the problem is on the roots, you have to soak the plant with a large quantity of liquid (the same proportions as set out above) so that it will destroy fungal problems on the roots. Pour the solution on slowly and allow to penetrate well.

I find Iodine is also very useful in treating nematodes. Nematodes (Meloidogyne) are microscopic worms which attach themselves to peony roots and which cause a decline in health over time. As the years pass, the stems become shorter and shorter, the flowers become smaller and paler, and the size of your plant shrinks. Nematodes love sandy, poor soil. We soak plants suspected of having nematodes in the same way as we do peonies with root problems, as mentioned above.