The following is quoted from the Ontario Judging and Exhibiting Standards for Horticulture and Floral Design, 2003 Edition.

Five basic flower forms are generally acknowledged. Sometimes classes are combined into one when the number of entries dictates such action. For instance, doubles are sometimes shown with semi-doubles in one class and anemones are usually shown with the Japanese form though some anemones are shown as doubles. Three peonies, when shown, may be entered under ‘Flowering Shrubs’ or in their own class in the Peony section.

Japanese: This form very much resembles the singles. Closer examination of the anthers reveals that there is no free pollen. The stamens have begun the transformation towards doubling, and pollen, though often present, is encased in tissue and unavailable. Examples: ‘Flying Tiger’, ‘Snowy Hills’. The filaments, which support the anthers, have also become some-what flattened. These transformed stamens are termed staminodes and are usually coloured with a yellow edge or tip. Examples: ‘Westerner’, Sword Dance’. 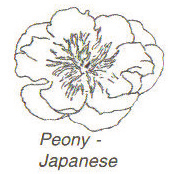 Anemone: These blooms represent the next progression in doubling. The staminodes have transformed even further and have lost any resemblance to the filaments and anthers from which they were derived. They look more petal-like, albeit narrower, and are now referred to as petaloids. They tend to be of one colour, which can be the same as the guard petals or a contrasting colour, often yellow or white. Examples: ‘Gay Paree’, White Cap’. 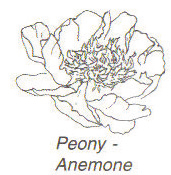 Semi-Double: These have a profusion of petals but always have pollen-bearing stamens and carpels. Examples: ‘Minnie Chiller’, ‘Marie Jacqui’, ‘Miss America’. 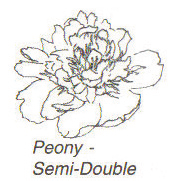 Double: Evidence of stamens and carpels is normally lacking since these have been fully transformed into petal. Careful searching may turn up a few of these structures in much reduced form. Typically, when present, they are not seen unless carefully examined. Examples: ‘Red Charm’, ‘Sarah Bernhardt’. 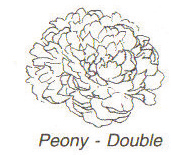